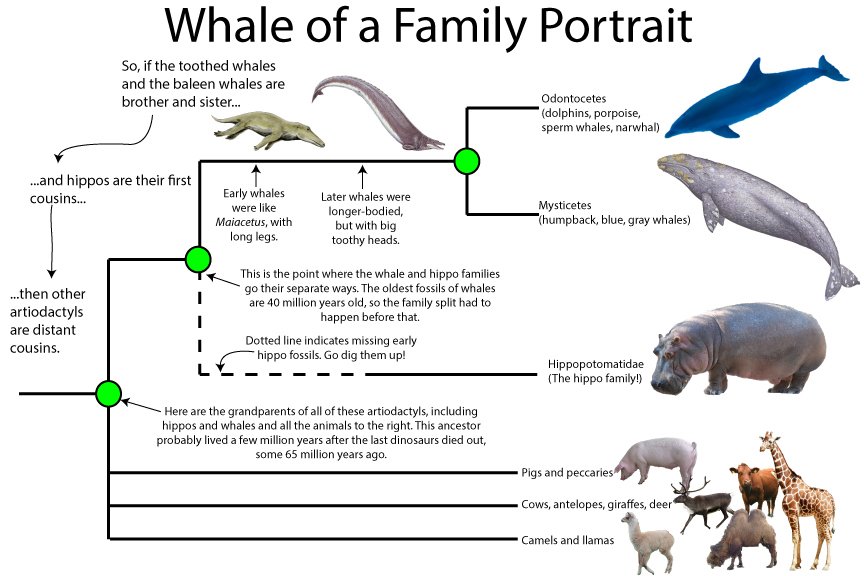 Although hippos and whales physically seem as different as night and day, wouldn’t it be mad as a box of frogs to learn that the hippos closest living relatives are whales?! Admittedly, hippos don’t resemble whales, nor live nearby (and presumably never call), and in many ways, are more like polar opposites. Yet these two groups of massive mammals actually are kin to each other. Bizarrely, hippopotamuses are believed by some to be whales’ nearest extant family members. And yes: they do, in fact, share some curious features rarely seen in other mammals.

The connection between hippopotamuses and whales is an old one, aging back some 50 to 60-million years, according to researcher Jean-Renaud Boisserie and his team at the University of California at Berkeley. The common ancestor was a four-limbed, semiaquatic mammal known as a “walking whale” that branched off into two separate directions: anthracotheres (a group of unusual land animals) and cetaceans (which became whales, dolphins, and porpoises). The only surviving descendent of these land animals is the hippo, making its distant cousin the whale its closest surviving relative!

While hippos are large and aquatic like whales, the two groups of mammals evolved those features separately from each other; this is known as convergent evolution. Convergent evolution is quite common, and the best modern example being the way sharks and dolphins resemble each other in body conformation even though sharks are fish and dolphins are mammals. Hippos evolved from a group of anthracotheres about 15 million years ago, the whales evolved from their common ancestor over 50 million years ago. This common ancestor was terrestrial, so it is remarkable that it gave rise to two different types of aquatic mammals, one marine and one freshwater.

When great-great-(100,000 more greats)-grandpa hippo-whale split off, he parted ways with the branch that would become modern-day ruminants (a large group comprised of most of the remaining hooved animals, including cattle, deer, giraffes, and antelopes). After a few million years together, hippos and whales eventually split up around 54 million years ago; each group started spinning off multiple variations, the vast majority of which went extinct.

Over millennia, whale ancestors’ feet morphed into fins (and eventually the back legs disappeared entirely), their bodies elongated and streamlined, and their musculature evolved to propel them through the ocean. Despite some very apparent differences, hippos and whales still share some incredible similarities.

The first commonality is their strangely similar stomachs. Multi-chamber stomachs define ruminants; they regurgitate food at least once, chew the cud, and swallow again, extracting more nutrients. Carnivores, on the other hand, have a single stomach; food is broken down chemically (as opposed to mechanically, as in the ruminants) and excreted in a single process.

Hippo stomachs are a strange hybrid; the animals don’t regurgitate food, but they do have two preliminary chambers, their walls roughly textured to help break down the food, which act almost as an internal compost bin; the stomach is so large and includes so many pockets and chambers, that food is given a chance to ferment before passing to the final, “true” stomach (which resembles the stomach of a carnivore). For years, biologists couldn’t figure out why whales, most of them carnivorous, had multi-chambered “grazer” stomachs, too. The discovery of the link between whale and hippo DNA, points to the whale’s terrestrial history, explains this longtime mystery!

As inexplicable as the whales’ land-lubbing stomachs, are the hippo’s undersea-oriented lungs. Most terrestrial animals, including humans, have multi-lobed lungs, but aquatic mammals have single, non-lobed lungs; these can fill with air, or expel it, much more rapidly, allowing animals to surface only briefly in order to “refill”. While hippos do spend plenty of time in the water, it was unclear why a pig descendant would first evolve lobed lungs, then re-evolve single-sac lungs. Much more reasonable is the assumption that an aquatic or semi-aquatic hippo ancestor with non-lobed lungs simply evolved to be even better suited to the water (that is, in the exact case of the whales!).

Still not convinced? There’s one very vocal piece of evidence: the hippo’s huge, strangely oriented larynx. Namely, this tie between hippos and whales involves their underwater activities. Not only are hippos and whales able to nurse their juveniles while in the water, but both can also send handy vocal messages to their own species while submerged.

In mammals, the size of the voice box corresponds to the sounds it can make; bigger larynxes can boom out bass-range sounds, tiny ones are great for treble. In hippos, not only are the larynxes disproportionately large, they’re oriented at a different angle than most terrestrial animals, in a way that matches whales’ voice boxes. And foremost, which is thought to help transmit the sounds into the water. Hippos have also been known to produce clicking sounds that resemble those made by orcas; it’s thought that most of their communication, in fact, occurs underwater.

Another notable similarity between the two groups is minimal hair. Both hippos and whales possess barely any hair on their bodies. They do not have sweat glands, either. These are both characteristics that can assist them in their aquatic lifestyles.

Hippopotamuses’ bodies, similarly to whales, are encased in dense fat that is reminiscent of whales’ blubber, which is situated between their muscle and skin.

Hippos possess markedly thick bones, a trait whales also display. The thickness of their bones enables them to descend into the water both quickly and effortlessly.

Until the middle of the 1980s, hippopotamuses’ closest family members were believed to be pigs and family Tayassuidae peccaries, the latter of which are New World pigs. Vincent Sarich, an anthropology professor, first brought up the notion of the hippo-whale tie. The idea of the tight familial relationship between these two groups of animals, when first brought into the public consciousness, was a highly contentious concept to many, and it still remains somewhat controversial.

Considering the evidence, maybe the hippopotamus needs a new name. “Ketosedaphos”, a combination of “ketos” and “edafos”, sounds about right to us; that would be approximate Greek for the “land whale” we’ve come to know as a hippo. For the whale, we love whippo!

One of the gaps in the hippo’s evolutionary tree was filled by the recent discovery of the fossil of a 28-million-year-old animal. The remains of the animal, named Epirigenys lokonensis, was found in Kenya, and it was much smaller than modern hippos and even pygmy hippos. Though E. lokonensis was not a direct forefather to modern hippos, it lived much closer in time to their common ancestor, and so scientists are now able to see clearer links between hippos and whales.

Like all jigsaw puzzles, the more pieces you have, the more coherent the big picture.

Whale of a Family Portrait

Check out our other whale-related posts