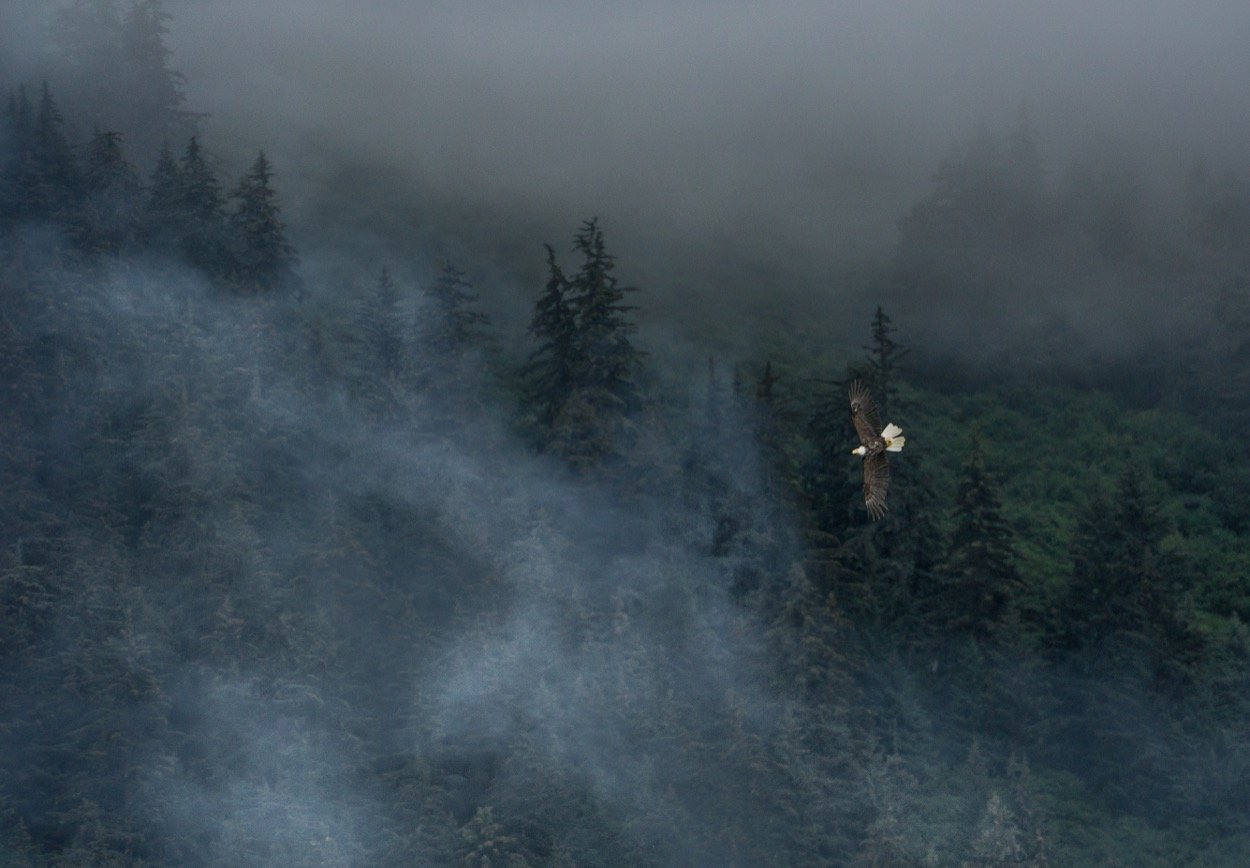 The moment you step off your cruise ship or aircraft in Juneau, you will be immediately treated to stunning views of the Tongass National Forest. Fact. Unsurprising to most, the region is often referred to as the “Inside Passage” or the gateway to Alaska. Undeniably, it’s one of the country’s (even the world’s?) greenest, biomass hotspots. It’s impossible to miss, primordially shrouded in mist most days, awaiting your pleasure.

At approximately 17 million acres, the Tongass National Forest is America’s largest national forest, encompassing the majority of the Southeast Alaska Panhandle. Rising from the deep, rich waters of Alaska’s Inside Passage, southeast Alaska is a land of ancient forests, mountains and glaciers. This temperate rainforest is a land shaped by the forces of water. Water stored in glaciers creeps out to the sea in titanic rivers and tiny streams. Water falls as rain, mist and snow and feeds the forest. The sea carves the coast while bringing nutrients from thousands of miles away deep inland. 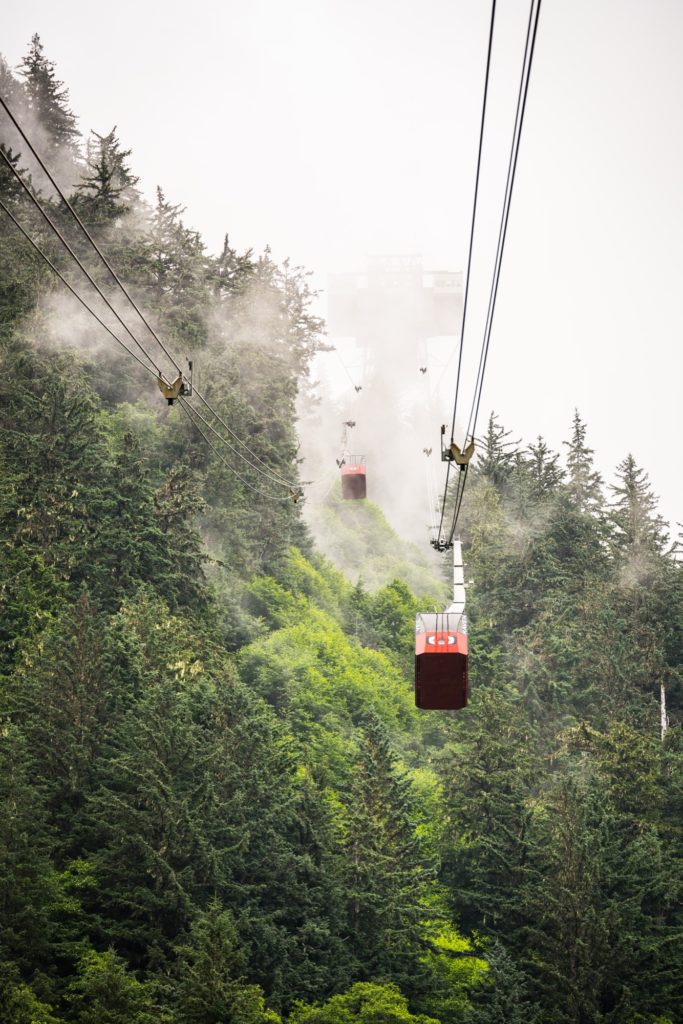 Taking a ride up to Mt. Roberts

Decades of clear-cutting has cost the Tongass portions of its best habitat, and yet the forest still contains some of the most intact expanses of temperate rainforest remaining in the world. It is home to five species of Pacific salmon, humpback and orca whales, otters, beavers, Alexander Archipelago wolves, plus some of the largest concentrations of brown bears and bald eagles found in the United States. 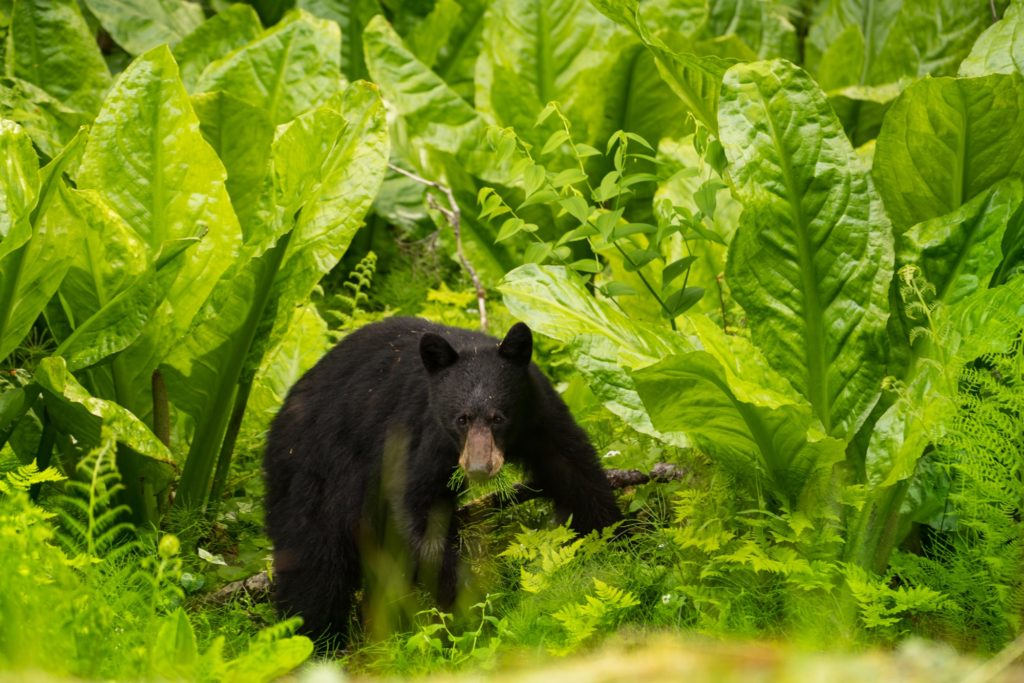 Black bear chewing on the sweet grasses in the Tongass National Forest, Juneau.

Decades of clear-cutting has cost the Tongass portions of its best habitat, and yet the forest still contains some of the most intact expanses of temperate rainforest remaining in the world. It is home to five species of Pacific salmon, humpback and orca whales, otters, beavers, Alexander Archipelago wolves, plus some of the largest concentrations of brown bears and bald eagles found in the United States. Its giant old-growth trees are also a warehouse of carbon, helping regulate the planet’s climate.

“Forests entrance people from all walks of life, and though it would be hard to select the “best” or “most amazing,” some forests simply take your breath away. Tongass National Forest in Juneau and numerous other parts of Alaska, is one of these places. Referred to as the crown jewel of the national forest system, Tongass has numerous qualities to tout. It is the largest national forest, covering more than 17 million acres. It also possesses the biggest reserve of coastal temperate rainforest in the world, which is the rarest and most valuable type of forest. There are 19 designated wilderness areas within the forest, more than any other national forest. And this is only the beginning.” Jami Westerhold, American Forests’ director of strategic initiatives. 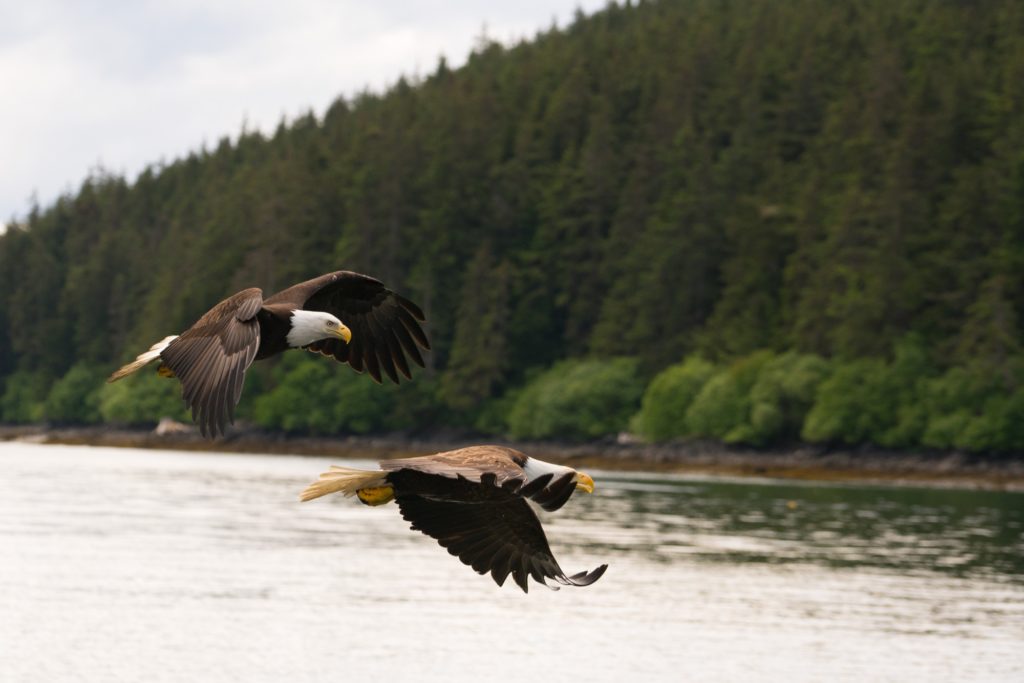 People and the Tongass National Forest

Alaska Natives have continuously inhabited southeast Alaska and the Tongass for thousands of years, depending on the bounty of salmon, deer and moose for subsistence. The first nations include the Tlingit, Haida and Tsimshian, and the forest itself is named for the Tongass group of the Tlingit people, who inhabited the southernmost areas of southeast Alaska, near what is now the city of Ketchikan. Dependence on the land is still a way of life here, a cultural tradition as well as a necessity, made possible by the abundance of fish and wildlife in the region.

Today, the Tongass is home to approximately 70,000 people spread among 32 communities, including approximately 32,000 in the state capital of Juneau. The region is defined by its primary industries with commercial fishing, tourism and recreation jobs among the fastest growing job sectors in southeast Alaska. These industries pump approximately $1 billion apiece into southeast Alaska’s economy annually and support approximately 7,200 jobs (fishing) and 10,000 jobs (tourism) respectively.

One of the winning ways to see the Tongass in Juneau: aboard our antique trolley!

In 1971, the Alaska Native Claims Settlement Act (ANCSA) authorized native local and regional corporations to select and receive title to a combined 44 million acres of public land in Alaska. ANCSA was intended to resolve the long-standing issues surrounding aboriginal land claims in Alaska, an important and necessary resolution.

However, the recently introduced Southeast Alaska Native Land Entitlement Finalization and Jobs Protection Acts (S. 730 and H.R. 1408) would re-open the ANCSA agreement, allowing Sealaska Corporation, a native Alaskan company, to select and receive titles to publicly owned lands (administered by the U.S. Forest Service) not included in the original agreement.

This legislation would allocate 65,000 acres of protected public land within Tongass to Sealaska for logging and development. These acres are considered valuable public lands and contain a large quantity of very-large-tree, old-growth forests. A report by Audubon Alaska estimates that the small and scattered parcels selected by Sealaska would increase the company’s ownership of very-large-tree, old-growth areas by twelvefold.

Logging and elimination of old practices

While these large-tree stands only account for 1.6 percent of the productive old-growth in Tongass, the Alaskan timber industry has a history of focusing its logging on the largest and most valuable old-growth trees of Tongass, and old-growth areas represent up to 27 percent of the lands Sealaska has selected.

Though the Tongass Timber Reform Act of 1989 eliminated the practice of high grading, the disproportionate logging, relative to the occurrence, of the largest and most valuable trees, the land selected in this legislation indicates a threat of a return to the practice. It is estimated that more than half of the large-tree, old-growth areas have been logged in Tongass, and with this legislation, Sealaska could log almost 17 percent of the remaining stands.

Weighing competing interests of protecting the Tongass as untouched wilderness area, versus human intervention for increased access for recreational purposes and harvesting trees for wood products, is what determines how we can manage our public lands’ natural resources. Achieving and maintaining this balance is often like walking a tight rope, moving too far to one side alters the equilibrium of everything else.

Being the home of the majority of America’s remaining old-growth forests, which hold more organic matter per acre than any other forest, including tropical rainforests, the scale clearly tips towards Tongass’ preservation.

Co-existence of humans and wilderness

As Tongass has always been a place where people and wilderness co-exist, the Southeast Alaska communities are dependent on the health and abundance of this forest to sustain their livelihoods and cultures. America’s most precious and endangered forests are far more valuable standing than cut down. 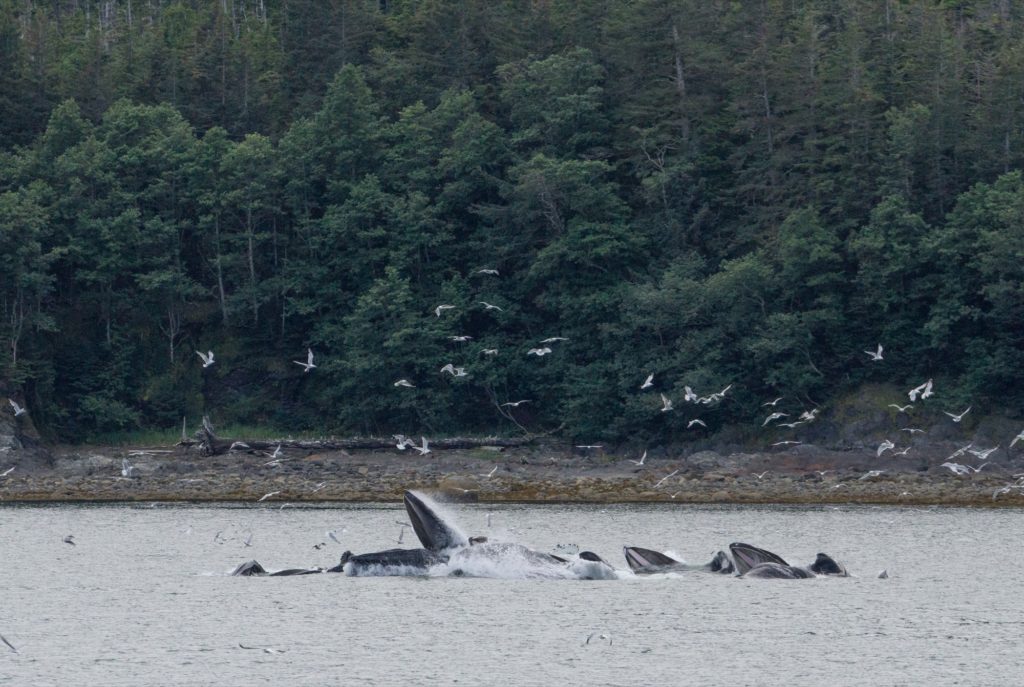 As President Theodore Roosevelt once said, “To exist as a Nation, to prosper as a State and to live as a people, we must have trees.” Though Tongass may not be in your backyard, it is unquestionably a national treasure that must be protected. However small, when combined with the actions of others, your individual actions can impact real and tangible outcomes for the preservation of the Tongass and the ultimately, the planet.

What wildlife will I see in Juneau?

What clothing to wear in Juneau 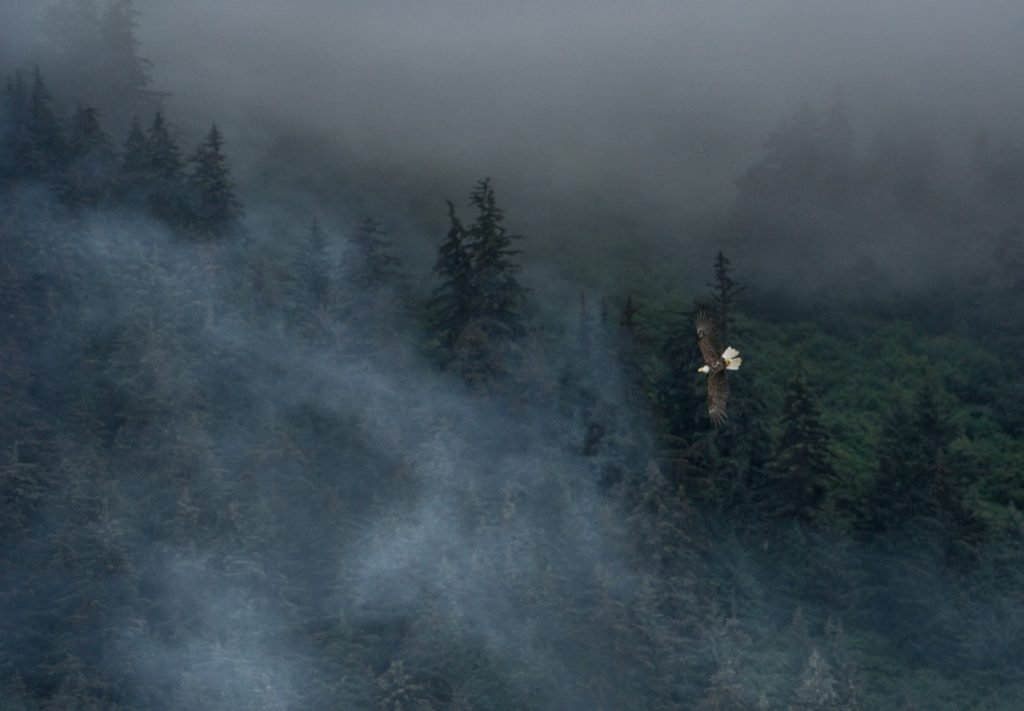