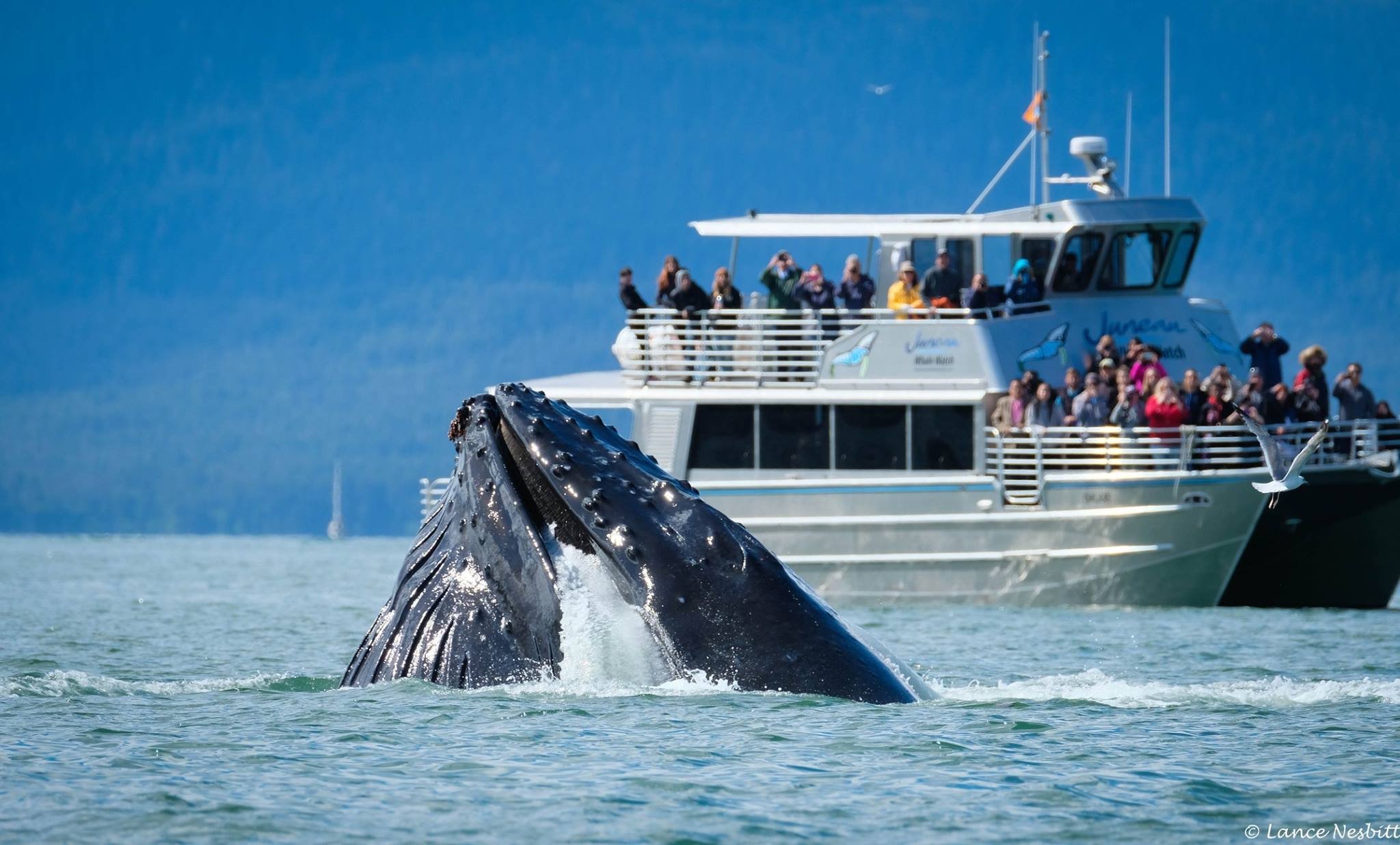 The North Pacific population of humpback whales are enormous creatures: akin to the size of a school bus! Namely, 40 to 45 feet, reaching up to 60 feet. They typically weigh 25 to 50 tons of stout whale, about a ton per square foot! They can live up to between 45 to 50 years, and are scientifically known as “Megaptera novaeangliae”. Easily identifiable too, by their abnormally large pectoral fins (flippers), big fanned tail and hump-shaped back with a small black dorsal fin. They’re renowned for their haunting and melodic songs often heard on the hydrophones aboard our whale watching boats.

Most whale watching companies in Southeast Alaska have a guarantee but what we can’t guarantee is what the whales will be up to when you do see them. As mammals, they’re air breathers that have to come up to the surface every 7 to 15 minutes.

Awaiting you is a feast for your eyes, perhaps repeatedly and regularly! However, keep in mind these mammals are wild and therefore, we can’t really predict when they will be at their most playful. No other whale puts on such spectacular acrobatic performances. Humpbacks are well known for their leaps or breaches: leviathan bodies bursting up into the air and crashing down in massive eruptions of spray.

As well, they enjoy lob-tailing an explosive crashing of their tails on the surface. And they often slap the water with their great wing like flippers too (also known as peck slapping). If you’re lucky, you may get to see them rolling too, a fantastic behavior when feeding.

Ever wondered why whales breach? It’s a good question and one with multiple schools of thought attached. Scientists themselves are still pondering why, we’ve tried asking the whales but so far answers have been elusive. One hypothesis is that they’re trying to shake parasites such as barnacles and lice off their skin. The impact of the mammal smacking against the water may be akin to a dog rubbing itself against a tree to scratch the fleas off its back.

Or, breaching may facilitate communication with each other; the sound made by the powerful breach may signal something significant: “Hey buddy, I’m over here. And it’s this way!” especially in rougher seas (which doesn’t apply to the Inside Passage where conditions are usually calm), when their songs will be harder for other whales to discern. After all, breaching is very loud, and sound travels faster in water.

Perhaps it’s the easiest way for babies to regroup with their mothers when they become separated. It could be a tried and tested method for a male to scare off an intruder too, such as an unattached male trying to mate a female. Alternatively, they may just want a look around topside. Have a nosy. Or simply: whales may breach because it’s enjoyable! Dolphins play, why can’t whales? All plausible theories. Who knows, it may just serve multiple purposes.

Humpback whales can migrate more than 3,000 miles on their annual journey starting in the North Pacific Ocean. They make their rounds during the winter to then visit Juneau’s pristine and protected waters. During the summertime, the blue planet sees them cruising the waters of Alaska, East Russia and British Columbia. During the winter they travel to mostly Hawaii, Central America, Asia, or Mexico for mating, giving birth and rearing their young.

No longer listed under the Endangered Species Act!

Interestingly, in the fall of 2016, the National Oceanic and Atmospheric Administration (NOAA) Fisheries deemed the once endangered humpback whales that feed here in Juneau, Alaska, recovered enough that they were delisted under the Endangered Species Act in 2016.

The U.S. government listed all humpback whales as endangered back in 1970, after commercial whaling had drastically reduced their numbers. But international conservation efforts to protect and conserve whales over the past 40 years proved successful for this population. The International Whaling Commission’s whaling moratorium, imposed in 1982, played a major role in the comeback of humpback whales, and remains in effect.

“Today’s news is a true ecological success story,” said Eileen Sobeck, assistant NOAA administrator for fisheries in September 2016. “Whales, including the humpback, serve an important role in our marine environment.” Fortunately, little will change for the whales visiting Southeast Alaska–they’ll still be covered under the Marine Mammal Protection Act.

Indeed, the whales leave Juneau with bellies full to bursting. As seasonal feeders and carnivores, they can gain around 12 lb per hour and eat up to 1.5 tons of food per day; namely filter feeding on tiny crustaceans like krill, and small fish such as herring. This particular species of whale does not live in family group; by nature they are solitary creatures who prefer to travel alone. That said, the humpbacks sometimes feed together in small pods.

Check out our post on bubble-net feeding to discover how they perform in this fantastic spectacle by their use of nets formed by cylindrical columns of rising air emitted from their blowholes. Even though they might not be in big groups on their way here, many times we will see the momma humpbacks swimming alongside their calves where there can be seen feeding collectively at any one time.

Will I see humpbacks on my whale watching tour?

We can 100 percent guarantee that you will see whales from the beginning of May through to the end of September. Your money back in full if in the unlikely event you don’t. The humpback whale show is one our favorites here in Juneau, Alaska. Come, join us this summer to indulge in a feast for the eyes. For sure, we want you to experience having an absolute whale of a time, we really do!