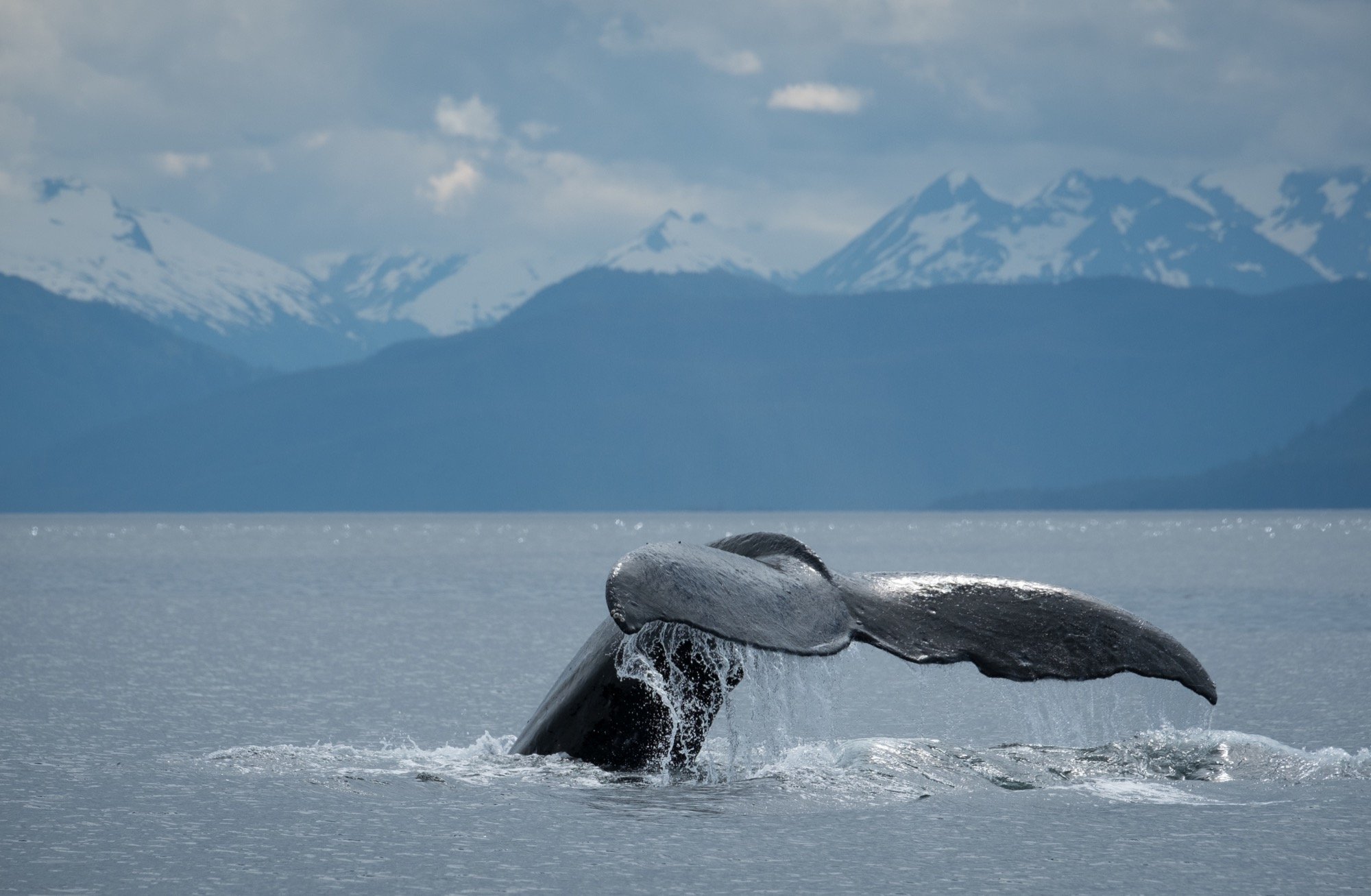 While it’s fascinating to learn about the science behind humpback whales (see our post on  The Humpback Whale Explained) it’s also fun to find out the crazy stuff about the largest mammal that migrates to Juneau’s waters every summer. Granted, there is still a lot of mystery that surrounds this enigmatic creature. Much remains unknown. Our knowledge of humpback whales has come in two distinct phases: studies of dead whales from the whaling industry, mostly ending in the 1960s; and studies of living whales at sea, which began in the 1970s. Marine biologists and other whale experts don’t even know exactly why humpbacks breach for example.

So here’s what we do know about humpback whales… or think we know! 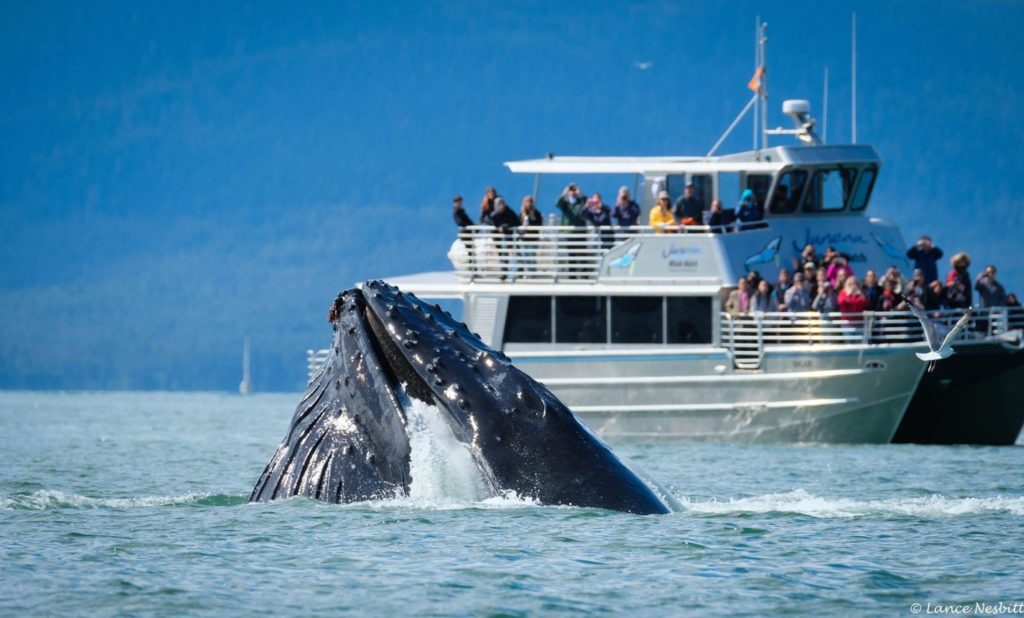 Glaciers, such as those within Juneau Ice Field, release glacial silt and contribute vast volumes of freshwater to land and marine environments. Southeast Alaska’s glaciers alone discharge enough water to fill 40 million Olympic-sized swimming pools. The turquoise lakes seen near these glaciers are colored by glacial silt suspended in the water. Glaciers scrape bedrock into fine, round particles of rock or clay, which are then carried away by tides or rivers. The glacial silt particles act as a nutrient, including nitrogen, phosphorus and unique ancient organic carbon, all of which contribute to the productivity of marine food webs. These very nutrients feeds the phytoplankton–microscopic, single-celled plants that drift near the ocean’s surface. The phytoplankton feeds shrimp-like zooplankton, such as krill. In turn, the krill feeds the herring. And herring (and krill for that matter) is the main staple for those swimming at the top of this food web: the humpback whales in Auke Bay and the Juneau area!

It takes a lot of krill and herring to make up the amount each whale needs to sustain itself on a daily basis–about 1.5 tons in our cold, nutrient rich waters. They gain up to 12-pounds in weight per hour when they do chow down, twice a day.

3. Humpbacks chow down only for a third of the year.

The humpback whale eats in its feeding grounds for no more than about 120 days. Incredibly, they live off their fat reserves for the rest of the year (an 8-month long fast) including the migration. 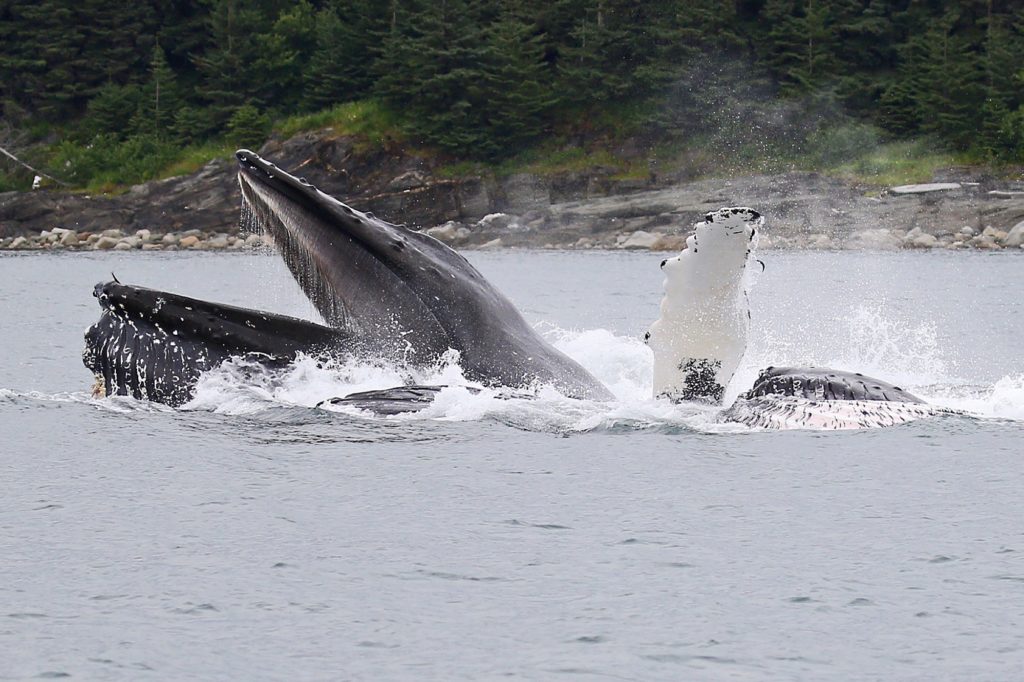 4. Humpbacks are BIG on bubble-netting!

Occasionally, humpbacks in Southeast Alaska will feed in coordinated groups using bubbles to trap fish at the water’s surface. This behavior is known as bubble net feeding. Bubble net feeding involves 4-20 whales all working together to herd schooling fish into dense schools. This complex feeding strategy is unique to whales in Southeast Alaska and off the coast of Antarctica. A group of humpbacks will dive down to herring schools where one whale (the bubble-blower) will release a ring of bubbles as it spiral beneath the prey (usually herring). As this air rises to the surface, it creates a curtain of bubbles that acts as a physical barrier to frighten and retain the school of herring. See our post on: Will I See Bubble-Net Feeding in Juneau, Alaska?

5. Humpback whales: the gentle giants of the sea.

Although enormous, humpback whales are not predatory. They are totally harmless to people. 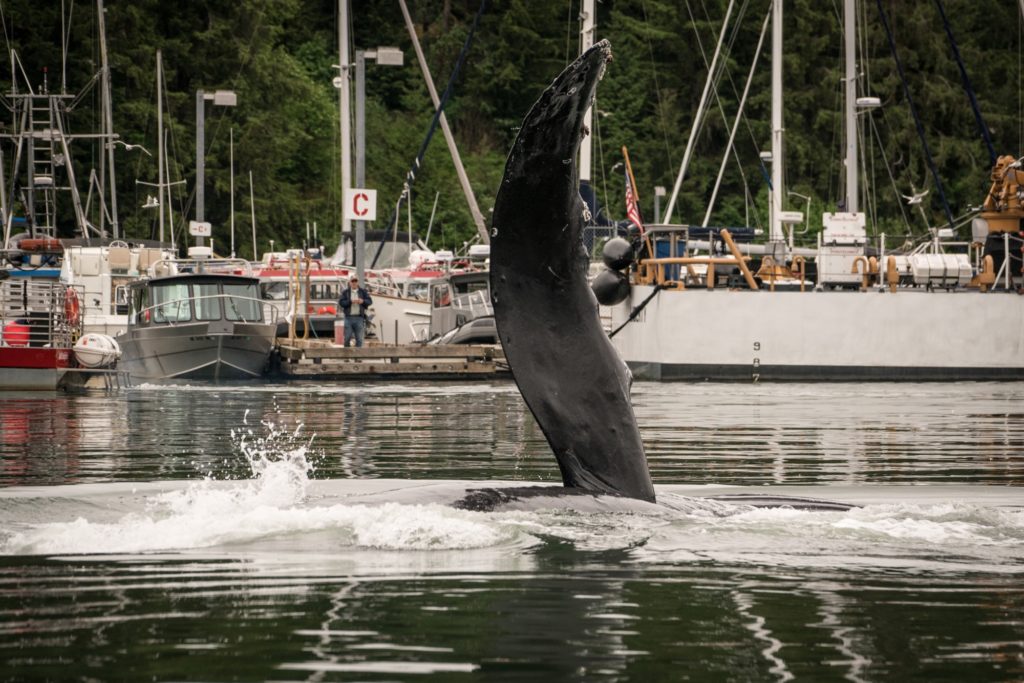 A humpback whale’s flipper giving everyone a cetacean sized hello!

6. Humpbacks are BIGGER than you think!

Humpback whales can reach up to 50-feet long, which is about the typical length of a school bus. Sometimes, humpback whales weigh as much as 50 tons. That’s about a ton per square foot, which altogether, equates to 25 automobiles. Or 6 African elephants. Or 10,000 house cats! On land, an animal as large as the humpback whale would almost certainly be crushed under its own weight.

7. DELISTED from the Endangered Species Act!

During the height of commercial whaling, the humpback whale was hunted almost to extinction. Global populations declined by more than 90% before the International Whaling Commission enacted a worldwide moratorium on hunting in 1982. Fortunately, the humpback whale has recovered remarkably well, and populations continue to increase. In 2016, the National Oceanic and Atmospheric Administration (NOAA) Fisheries delisted the population (seen in Southeast Alaska), from the Endangered Species Act. Rather, they’re protected from the act, along with the Marine Mammal Protection Act, making it illegal to harass, injure or kill a humpback whale in U.S. waters.

8. Humpbacks feed near the poles and breed in the tropics.

The humpback whale has a truly global distribution, living from Antarctica to the Arctic. Every year, they undergo incredible migrations between feeding and breeding grounds. The tropics see them mate, calve and nurse in Hawaii in the winter. The summer sees them migrate to feed in the Gulf of Alaska and other areas in the North Pacific.

9. Slow and steady wins the race!

Annually, individual humpback whales travel as much as 16,000 miles between their winter-feeding grounds and summer breeding grounds. When a humpback migrates a round trip of 5,000 miles from Alaska to Hawaii, each way takes about a month. That’s an average speed of 3-7 miles per hour.

10. Spouting to the stars

A humpback’s spouting can reach as high as 20-feet. It can also be heard as far as 800-feet away! 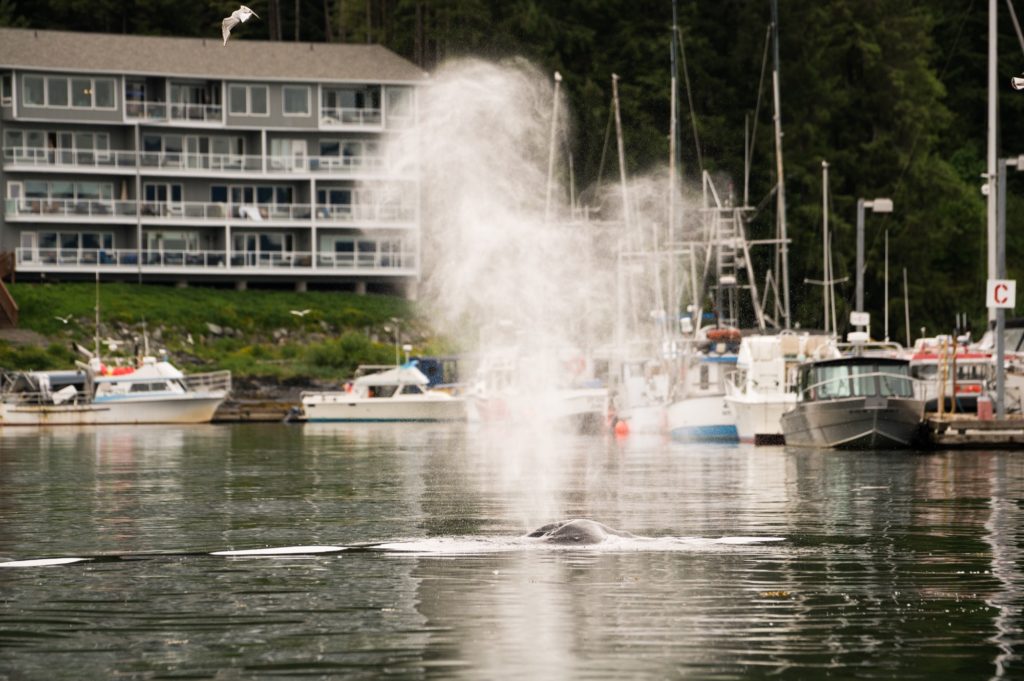 11. Humpbacks are all heart!

A humpback whale’s heart can reach up to 440-pounds in weight, the equivalent of 3 grown men.

Humpbacks have a series of 270-400 baleen plates instead of teeth. These overlapping plates are made from keratin, the same substance found in your hair and fingernails. To filter feed, they take in large volumes of water and sieve their food through the baleen plates. 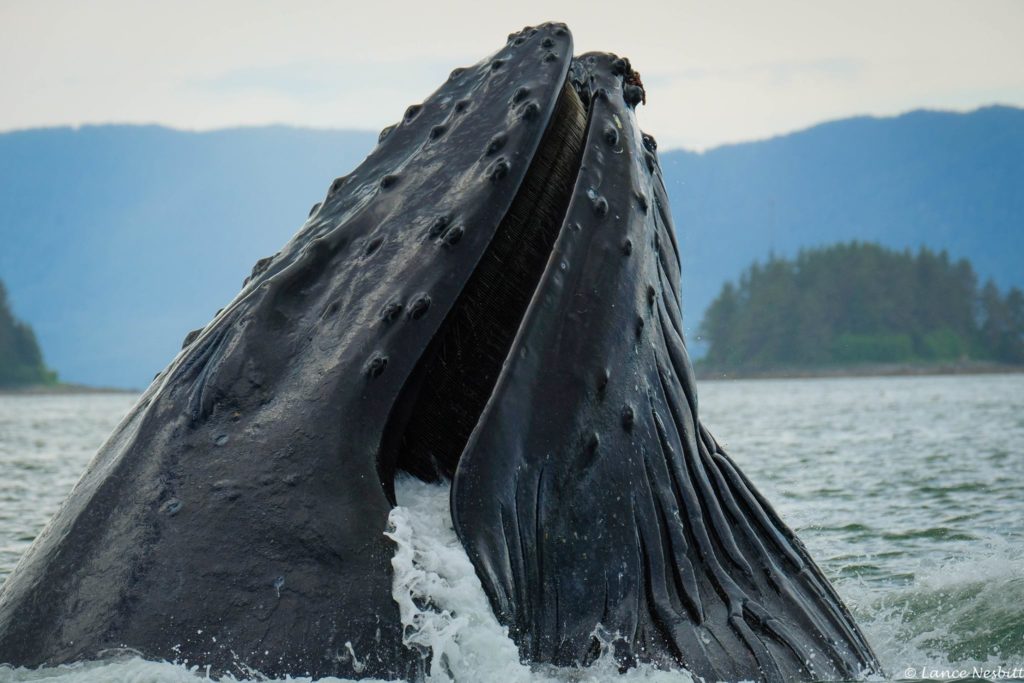 An average size humpback whale can hold approximately 5,000-gallons of water in its mouth. That is enough to fill a 12-foot by 10-foot swimming pool at a depth of 7-feet.

Stiff hairs come out of the top of tubercles, large bumps on the head and lower jaw. It is thought that these hairs may serve a sensory function. Humpbacks also have tubercles without hair on the leading edge of the flippers that reduce drag and increase lift.

15. Listen up: humpbacks have a voice.

Each population communicates through its own dialect, and sings its own whale song. Humpback whales produce moans, grunts, blasts and shrieks. Each part of their song is made up of sound waves. Some of these sound waves are high frequency. If you could see these sounds, they would look like tall, pointed mountains. It’s one of the distinguishing attributes of the humpback whale and probably the most complex in the animal kingdom.

However, only males sing. No female has been heard or seen singing. Each baby learns from other whales around him on how to make a series of sounds and compose intricate “songs.” The males often sing while suspended deep below the surface, their long front flippers jutting rigidly from their sides. The songs can last up to 20 minutes, and can be heard more than 20 miles away! 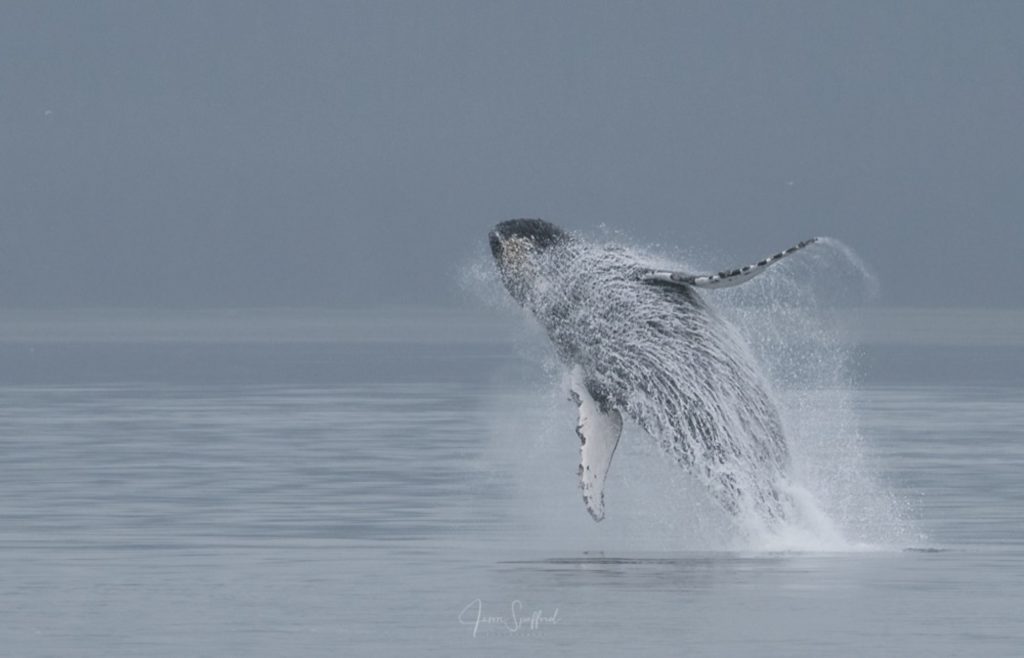 In addition to the high frequencies produced, whales also emit low frequency sound waves. These waves are like hills that are wide-spread apart. These sound waves can travel very far in water without losing energy. Researchers believe that some of these low-frequency sounds can travel more than 10,000 miles in some levels of the ocean!

Not only are their songs audible up to 20 miles away, each song can last for 20-30 minutes. The whales repeat the same song over and over again for hours. Hey, it takes time to attract the females! All the singers in a population sing the same version of the ever-changing song at any one time; the whales in the Pacific sing one song and the whales in the Atlantic another. Scientists don’t know why.

A “spy hop” for instance, is just one of the behaviors humpback whales can be seen performing. To execute, a whale rises vertically toward the surface, with its head out of the water. Some believe this behavior allows the whale to look at activity above the surface. Maybe they’re curious about us (the creatures above the water) as we are about them!

18. Humpbacks have a HUGE head!

A humpback brain can weigh up to 14-pounds, nearly 5 times the weight of a human brain. Not surprisingly, the head comprises up to one-third of the total body length. 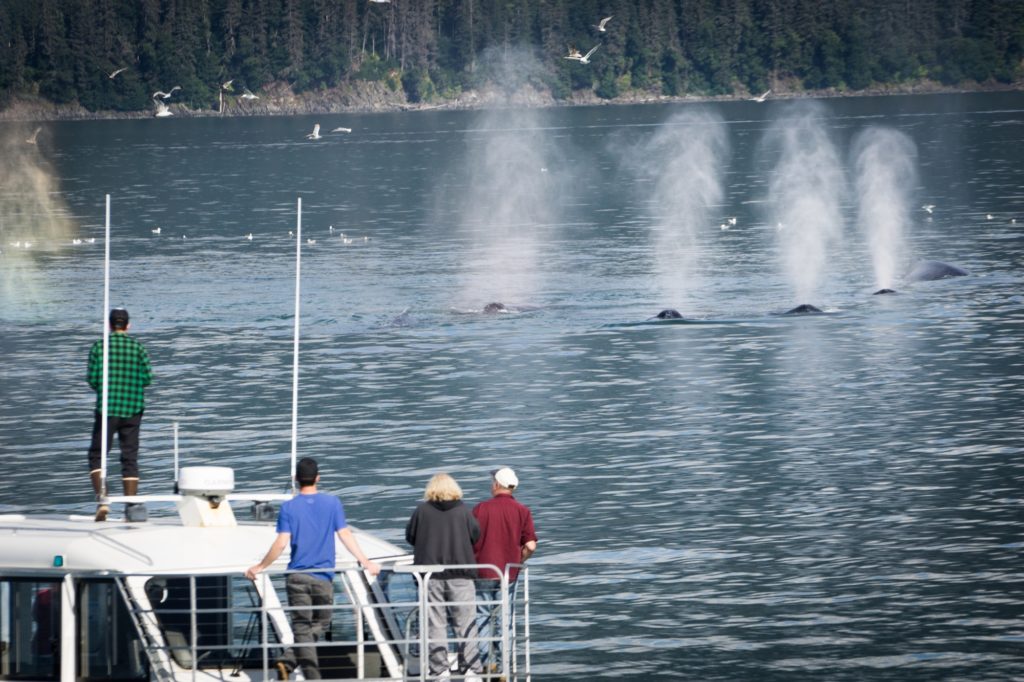 19. A humpback whale actually has to think about breathing.

As big as their brains are, humpbacks have to consciously think about breathing. Unlike humans, who breathe involuntarily. To go to sleep and still breathe, they’ll shut off half their brain at a time.

A newborn humpback whale calf is approximately 12-15-feet long and weighs around 1.5 tons. Each baby whale consumes up to 52 gallons of milk per day to gain enough weight for its long migration. 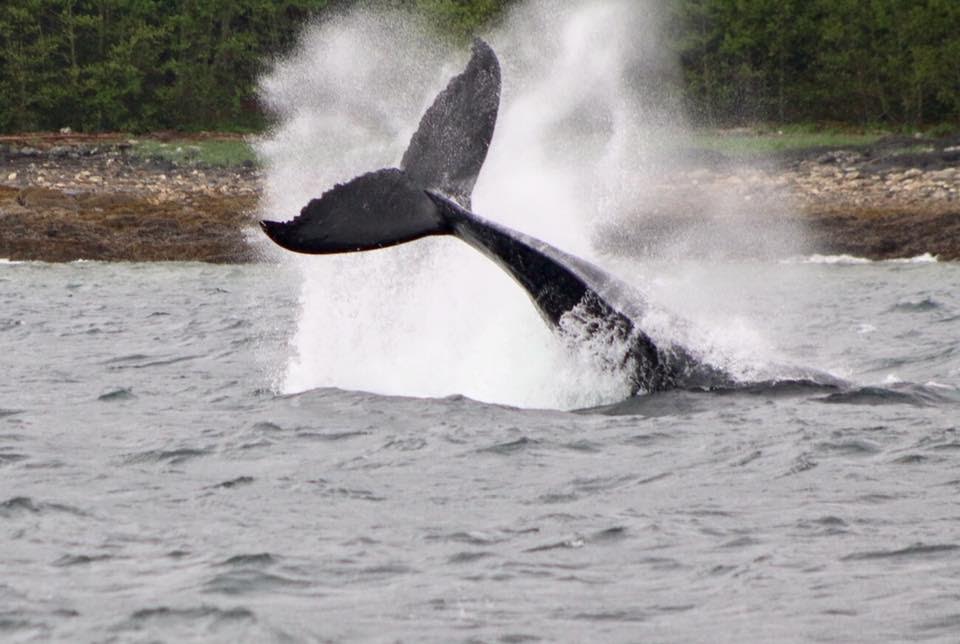 A peduncle is the body part connecting the tail flukes to the body. The peduncle enables a quick, powerful sideways thrust of the tail and lower body resulting in an amazing splash of water. A force not to be reckoned with, there is enough force in a peduncle slap to kill an orca upon attack! 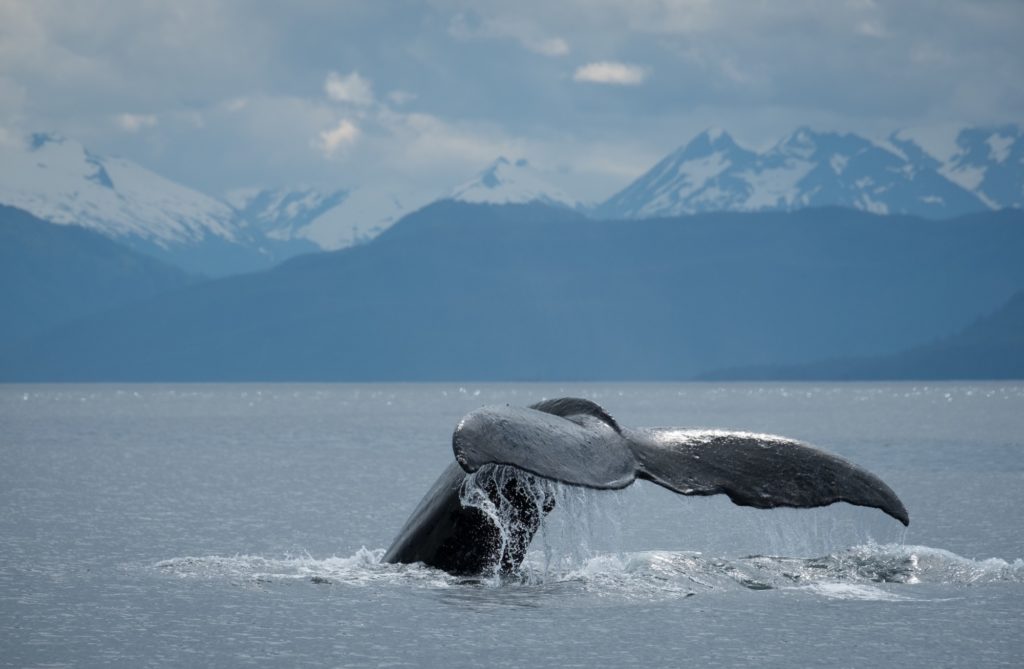 The peduncle is partly why the humpback whale is extremely maneuverable and the acrobat of the whale world. In fact, the same power required to breach their 40-50 tons in weight is equivalent to the power required to lift a 747 aircraft off the ground. 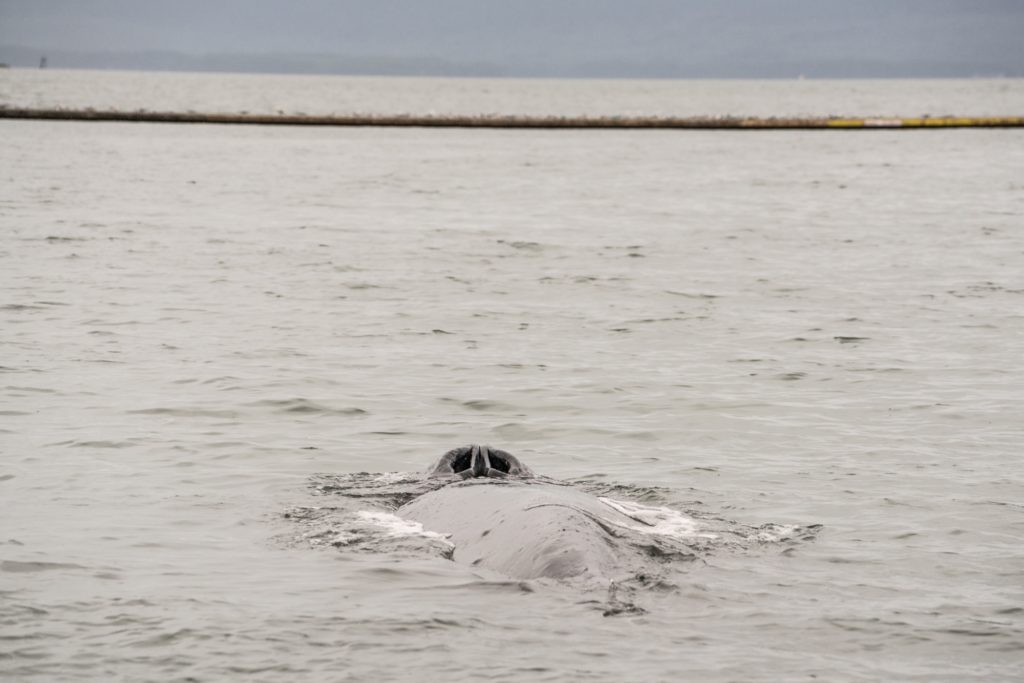 These animals have not one, but two blowholes. There’s one for each of their lungs, each about the size of a small automobile!

Each whale has a different and unique design that can be found on its underbelly. The white markings are like human fingerprints; no one pattern is the same. Scientists use these markings to recognize and identify the whales. 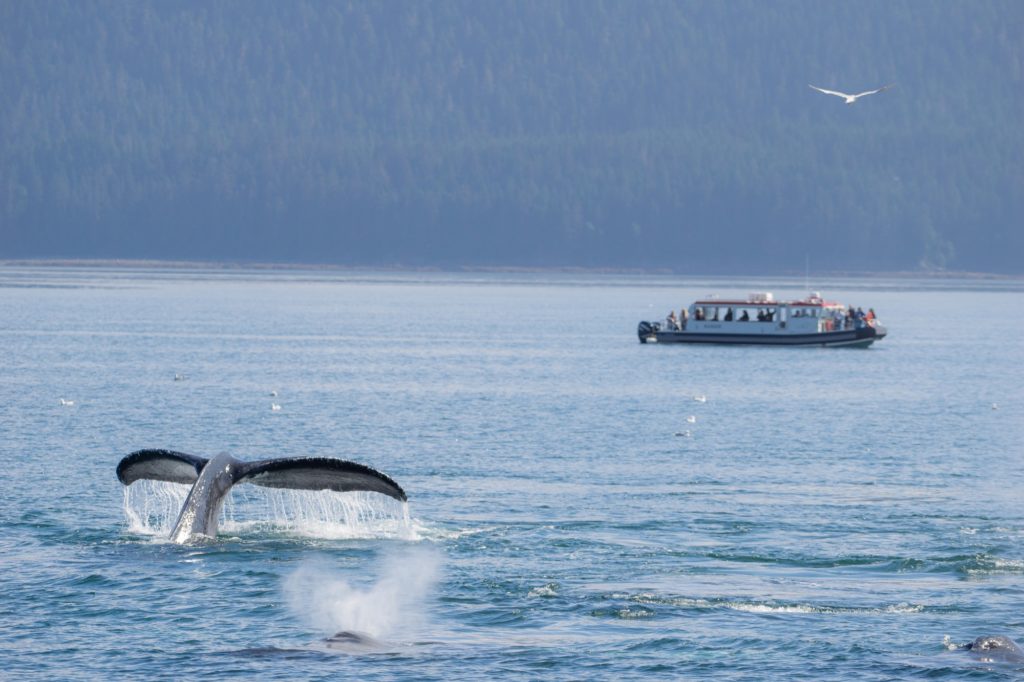